Our budget this year will focus resources on those who need it most and what matters to communities. This means the overall budget of £145.7m will concentrate on vital services to support our vulnerable children and adults, and services in the community, which takes up almost 55% of our total budget.

It was agreed at Full Council on 25 February to raise council tax by 1.99%, with an additional 3% to support adult social care services.

The total increase in council tax for 2021-22 will be 4.99% to meet the needs of a growing population and offset reducing funding from the government. The Kingston element of the increase is equivalent to approximately £1.55 a week extra for a Band D household.

Over the last ten years we have saved £117m with your help, but we need to go further to meet the challenges ahead. Here are some key facts about the borough and its budget:

We received £66m of general funding from Central Government in 2010. This has been reducing year on year and we now receive £0

What do we spend our money on?

The biggest areas of spend are... 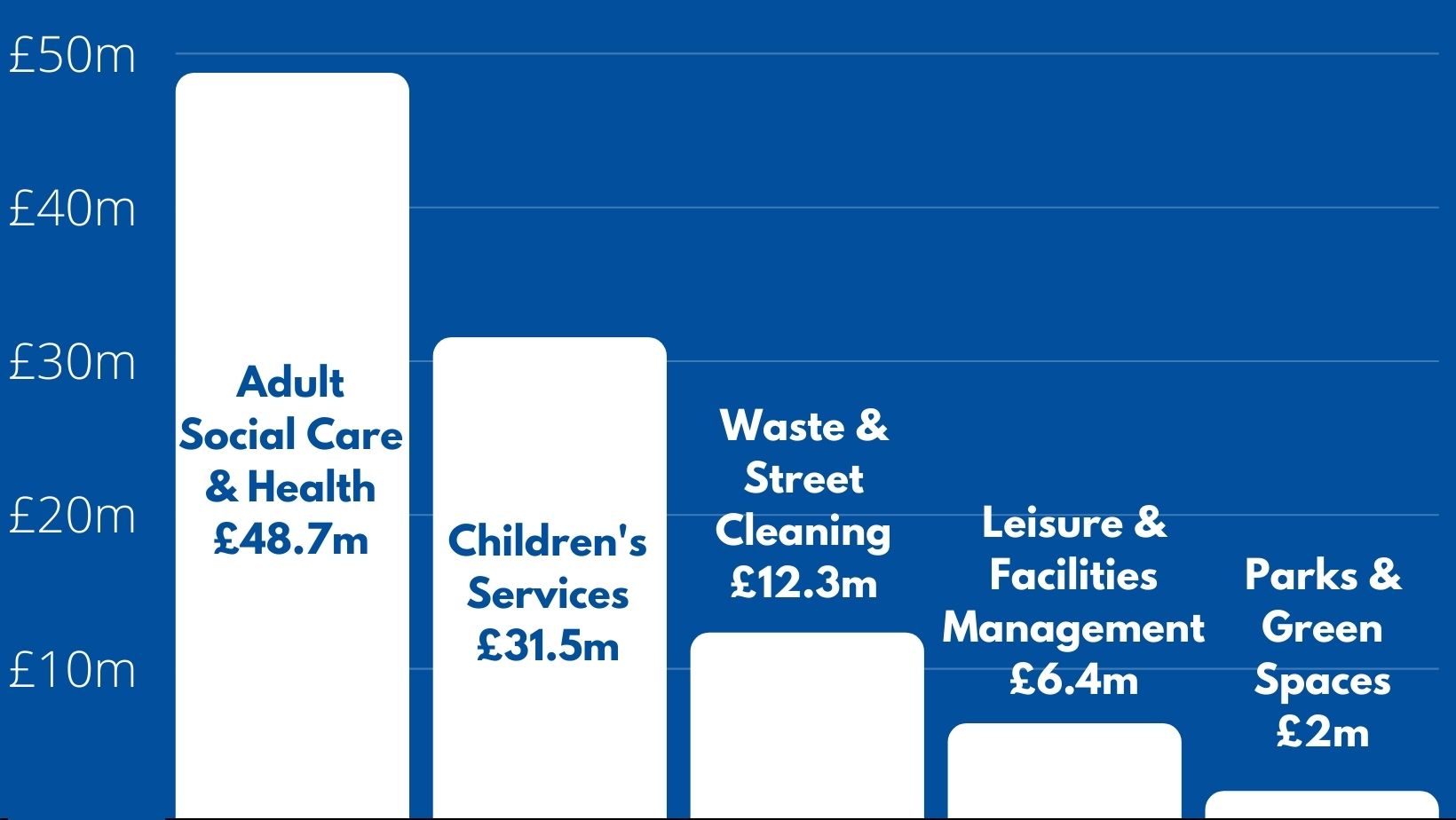 Where do we get our money from? 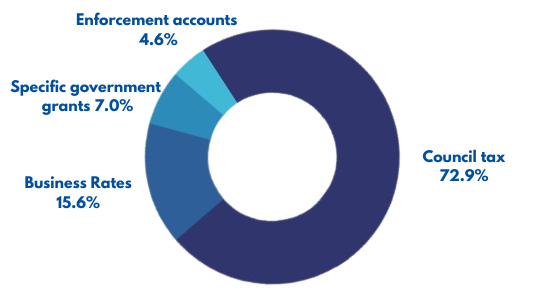 *The Wimbledon and Putney Commons Conservators area is equivalent to 1609 Band D properties.

How the council tax is broken down

Your council tax is made up of two elements:

In line with national government policy, we have taken the decision to raise council tax by 1.99% and support Kingston’s vulnerable and ageing population by levying a social care precept of 3%*. We also collect council tax on behalf of the GLA, which has set a rise of 9.51%, or £0.61 a week. You can find out more about the GLA and its plans for the forthcoming year on the GLA website

The offer is the option of an adult social care authority being able to charge an additional “precept” on its council tax without holding a referendum, to assist the authority in meeting its expenditure on adult social care from the financial year 2016-17. It was originally made in respect of the financial years up to and including 2019-20. If the Secretary of State chooses to renew this offer in respect of a particular financial year, this is subject to the approval of the House of Commons.

Why are you putting up my council tax?

The decision to raise council tax is always difficult and isn't taken lightly, but given the limited ways of raising funds and the need to budget in a responsible and achievable way, we have little choice but to ask residents to pay a bit more for the services we deliver to everyone, especially our most vulnerable residents.

We have a growing population in Kingston, with around 177,000 residents at the moment, and this will grow to an estimated 196,000 by 2030. This puts increasing pressures on social care and special educational needs and disability services as a result of growing numbers of children in need and our ageing local population. The council tax increase is essential to meet those costs.

Our Government grant has gone down every year since 2010, and despite intense lobbying, we no longer receive any general funding. This means that the money we receive from council tax makes up over 70% of our total income, which makes this year’s increase vital for us to be able to meet the growing demand for the council’s services and support.

I hardly use any council services - why do I pay the same as those who do?

Council tax is not a direct bill for services; you’re paying for the cost of maintaining the borough’s essential services and ensuring that we can support the most vulnerable among us. In total, around 55% of our budget is spent on helping vulnerable people, including the elderly and children. Our single biggest expense is adult social care, which accounts for 33% of our budget. We are a community - collectively caring for all our residents.

Does this mean you are going to increase council tax next year and in the future?

No decision has been made about council tax increases for next year. However, there is still a gap to close in future years.

Why is council tax in Kingston one of the highest in London?

The Government funding we receive in Kingston has historically always been low compared to most other London boroughs because Kingston is seen by the Government as an area of low need. While there are some affluent areas, there are also many areas that are in real need. Though we no longer receive any general funding our overall budget hasn’t changed. This means we need to raise more money through council tax.

Why doesn‘t the council just use its reserves instead of making cuts?

The Government has highlighted some local authorities as having significant financial reserves, but we’re not one of them; our reserves are among the lowest in London even compared to our small size. Continually dipping into them to help cope with the pressures we’re facing would not be a sustainable way to deliver a balanced budget.

Reserves, like your savings, can only be spent once, so eating into them simply puts off the tough choices for the next year, when the financial situation is likely to be even worse. Reserves need to be kept aside to cover for unforeseen events and specific projects rather than business-as-usual spending.

Education for children with special educational needs and disabilities (SEND) are paid by a separate council account (dedicated schools grant high needs block). Central Government fund this but it isn’t enough for all our children, so it has been overspending. The accumulated deficit will be £25 million by March 2021.

Why don’t you put up business rates instead?